Some changes to QSLing 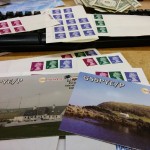 This year, we’re making some changes to the way we handle QSL cards.

If you requested a direct card in 2014, you may have found it took longer than normal to get a reply – entirely my (M0VFC’s) fault, after a year of trying to do too much in not enough time! Hopefully you will have received your card by now, but if not, let me know by email (see QRZ.com) and I will check the log to make sure your card has been sent. My apologies for keeping some of you waiting for so long, and thank you for your patience.

To avoid these delays happening again this year, we would like all QSL requests to use OQRS (online QSL request system). As before, this will be using Club Log, and logs will be uploaded regularly. This applies to both direct (£1.50 – about $2.40) and bureau (free) requests.

Here’s why we believe OQRS is a better option:

We realise in a few countries, PayPal is not available, so if you really cannot use OQRS, cards sent direct to M0VFC will still receive a reply, but OQRS requests will be processed first.

We are, of course, very happy to send QSL cards to those who want them, or need them for an award, but also wish to reduce the amount of waste currently in the system.