On Saturday, G4BAO, M0VFC and M0BLF met at the normal G3PYE/P contest site at Worts Causeway, to the south of Cambridge, to test the 472kHz equipment we’re taking to Mull for the first time.

We’re using an FT-817 as the receiver, and transmitting with the FT-817 on 80m with a transverter down to 472kHz. For an antenna, we’re using a 20m Spiderbeam pole with a vertical driven element (ending in a large coil on the ground), plus three wires coming 2/3rds of the way down the guy ropes, which form a capacitance hat. It took quite a long time to get the tapped coil just right to allow the system to be tuned across the band, not helped by the short but sharp showers, which periodically forced a coffee break upon us. With the help of  a mini-VNA, however, we did finally get a resonant antenna. The next step was to start transmitting a beacon on WSPR, and we were soon reported on WSPRnet as being heard by G0MJI, G4WMZ, M0LMH, M1ACB, PA1GSJ and PA3ABK. This was very encouraging as it means we were heard by stations over 300kms away during daylight, despite only using 20W. On receive, we only heard G3XIZ (who is relatively close at about 30kms) but we don’t know what power the other stations were running, if, indeed, they were transmitting at all. Still, it’s a good sign for when we operate during darkness hours from Scotland.

Successful tests today of the 472kHz TX converter with WSPR, Reports from over 600km this evening. I’m still a little unsure of how good the receiver on the 817 is so more tests on that tomorrow. Hope to play with antennas up at Wort’s causeway over the weekend, WX permitting? I will bring Rob’s VNA, …
Read more → 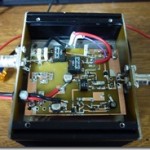 I have now completed the G3XBM Transverter. (see picture)   It produces around 10-15 Watts on 472kHz driven from and FT817 on 80m. The 817 has been checked out on WSPR receive, so I need to find out what other digimodes I need to prepare. The switching PA design means that we are limited to …
Read more →